Screening of ‘Made in Dagenham’ 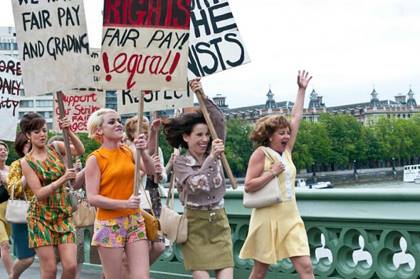 Screening of ‘Made in Dagenham’

On the eve of International Women's Day, Moviment Graffitti invites you to the screening of the movie 'Made in Dagehnam', followed by a discussion, drinks and nibbles.

Everyone is welcome. Free entry.

'Made in Dagenham' is a 2010 British movie directed by Nigel Cole. The movie tells the true story of the Ford sewing machinists' strike of 1968, demanding equal pay for women. The protagonist, a fictional character, leads the 850 female workers of the East London plant to protest against sexual discrimination and for equal pay. The strike was successful and led to the Equal Pay Act  of 1970.

Until 1968, the female machinists at Ford were classified within the company's pay structure as grade B. That meant they were officially considered as unskilled, despite having to pass tests in order to gain their employment.

International Women's Day - 8th March - marks women's struggle for equality and against patriarchy. The origin of this day is rooted in Communist women's groups in the beginning of the 20th century. Women from all around the world have fought and obtained better conditions in their lives, on many levels. Still, our society is rife with contradictions and inequality. Women's work is still widely undervalued and unequal pay persists. Violence against women is a dramatic reality; in 2018, four women were murdered in Malta by their partner or a close relative. Moreover, we consider the present taboo on reproductive rights in Malta as undermining women's freedom, health and wellbeing.

The fight against patriarchy has to continue.