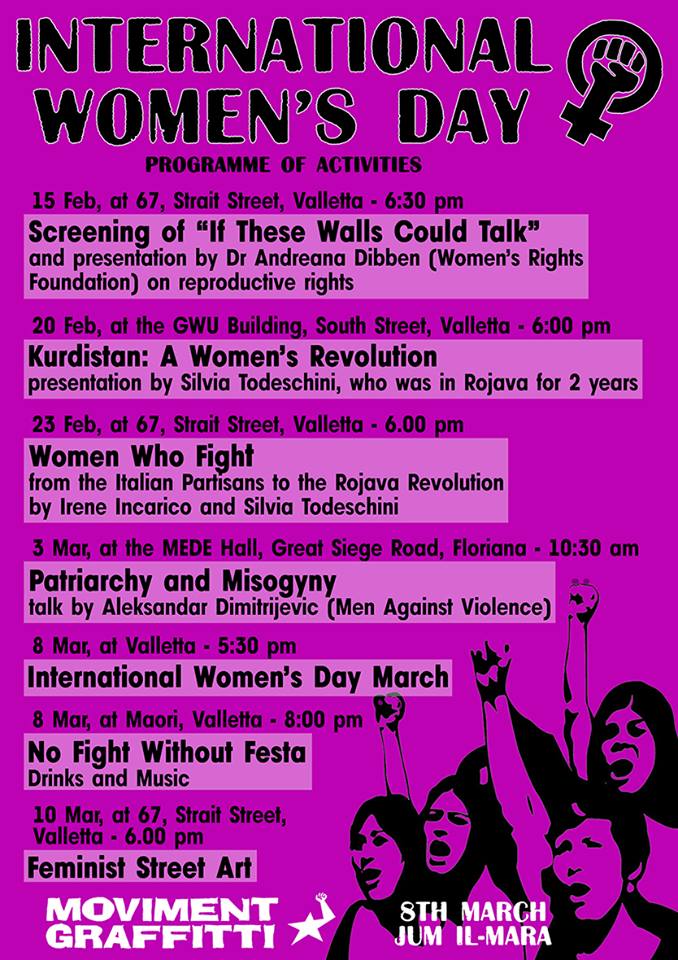 Moviment Graffitti is organising a series of initiatives connected to International Women’s Day 2018 aimed at bringing into focus issues of gender inequality as well as the strength of women fighting oppression.

In a talk entitled “Kurdistan: A Women’s Revolution”, Silvia Todeschini, who spent two years in Rojava (northern Syria), will present the situation in this area, where Kurdish groups have liberated and defended their territory from ISIS. They are currently facing a military attack in the Afrin district, at the hands of the Turkish state. She will focus on the role of Kurdish women in armed groups and the ongoing revolutionary process permeating all levels of life. Theirs is not only an armed struggle; it is also a social, cultural and political struggle involving the concept of Jineoloji (the science of women). The talk is going to be held on Tuesday 20th February, at 6:00pm, at the Council Room, GWU, Workers’ Memorial Building, South Street, Valletta.

On Friday 23rd February at 6:00pm, we will continue dealing with the topic of women fighting against injustice, this time through a presentation entitled "Women Who Fight: From the Italian Partisans to the Rojava Revolution". Irene Incarico (Visiting Senior Lecturer at the University of Malta) will present three women of Italian Resistance - women who fought against fascism. Silvia Todeschini will speak about Kurdish women fighting for freedom. This will be followed by food, drinks and music. The event will take place at 67, Strait Street, Valletta.

On Saturday 3rd March, Aleksandar Dimitrijevic, from the organisation Men Against Violence, will deliver a talk on patriarchy and misogyny, at the Multipurpose Hall, Ministry for Education and Employment, Great Siege Road, Floriana. It will start at 10:30am.

On Thursday 8th March, International Women’s Day, the public is invited to participate in the march: Jum il-Mara - Semma’ Leħnek. We will march down Republic Street together to denounce violence against women and all forms of sexism. It will start at 5:30pm from City Gate, Valletta. After the march, at around 8pm, we will meet at Maori Bar (Valletta) for some drinks and music. The march is being organised in collaboration with the Women’s Rights Foundation, Gender Equality Malta, Men Against Violence and Integra Foundation.

Closing the International Women’s Day programme, on Saturday 10th March at 6:00pm, is an initiative entitled “(Re)claiming Public Space: Queer-Feminist Interventions Against Street Harassment”. KL*aUs will give a talk on feminist street art, followed by food, drinks and music, at 67, Strait Street, Valletta.