Feedback to the Revised Draft Policy Guidance for Fuel Stations 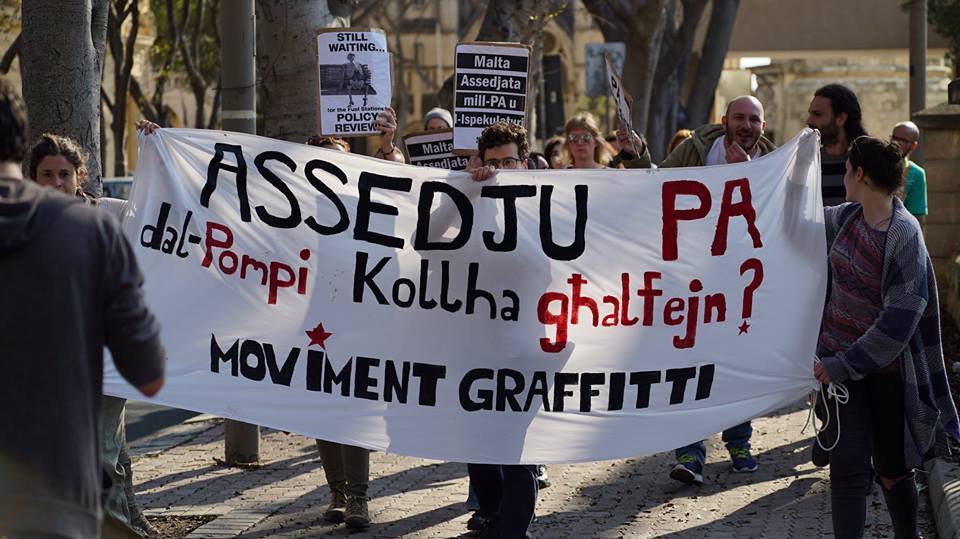 Feedback to the Revised Draft Policy Guidance for Fuel Stations

Moviment Graffitti welcomes the latest draft of the long overdue revision of the Fuel Station Policy. We reiterate our view that further delays in the implementation of this new policy are no longer acceptable, and we believe that, if the authorities are serious about the honest implementation of a policy termed as “restrictive,” they will immediately update the policy by removing all potential loopholes to create a set of foolproof regulations.

In fact, while acknowledging the undoubted improvement over the current policy, Moviment Graffitti nonetheless remains concerned by several aspects of the latest revisions.

It is with disappointment that we note this revised draft policy still allows for the relocation of existing fuel stations to ODZ land. The fact that ODZ land remains available for development, notwithstanding the increased constraints in that regard, continues to devalue the ODZ classification. Moviment Graffitti stresses that ODZ should remain ODZ, and land already committed should not continue to be degraded, but should be returned to its natural state or used for agriculture. A similar loophole has led to the loss of a great deal of ODZ land for residential purposes. We can only expect more of the same if the proposed policy comes into effect.

(f) any site located ODZ covered by a valid development permission or a site located ODZ committed by development carried out before 1967 (which is visible on the 1967 aerial photographs or Ordinance Survey Sheets and verified by the Planning Authority’s Mapping Unit), provided that the development is not related to agriculture and/or animal husbandry, and where the establishment of a Fuel Station will result in a wider environmental benefit.

[...] This policy document does not apply to the construction and operation of commercial petroleum filling stations.

Considering that the same planning, environmental and land-use considerations apply, we see no legitimate reason why commercial petroleum filling stations should be excluded from the scope of this policy. Doing so would result in even more regulatory loopholes and inevitably pave the way for more unsustainable and unregulated development.

We therefore suggest that commercial fuel stations be included in the scope of the Policy Guidance for Fuel Stations.

2.4. The proposed fuel station should not be located on:

(a) agricultural land as defined by the Agriculture Advisory Committee

The responsibility placed on the Agricultural Advisory Committee to determine whether a piece of land qualifies as ‘agricultural land’ adds another layer of bureaucracy to the gradual take-up of our remaining open space which would confer no protection or foresight, but would simply rubber stamp decisions taken elsewhere. One can recall the case of the Luqa fuel station, where, despite the site’s designation as good agricultural land by the ERA and as an Area of Agricultural Importance in the South Local Plan, the Agricultural Advisory Committee’s silence condemned the fields to development.

It is of great concern that point 2.5 of the Policy states that there shall be no footprint limit for fuel stations on: a) Designated Industrial Areas; b) Small and Medium Enterprise Sites; c) Areas of Containment; d) Open Storage sites; and e) areas designated for development in the local plan.

Whilst highlighting the fact that some of the above categories (such as Areas of Containment) are ODZ sites, we also note that allowing an unlimited footprint on such sites will pave the way for massive complexes of commercial services for cars, using the excuse of dispensing fuel to justify the take-up of large parcels of land. Moviment Graffitti maintains that fuel stations should be limited in size, with other commercial activities related to car servicing operating under a commercial policy. The current and proposed policies both allow this abuse. We therefore suggest that the policy is amended to allow for a reasonable capping of the maximum footprint of fuel stations located in sites other than those indicated in point 2.2.

In addition, we also note that the current revised policy makes no mention of a minimum distance allowed between two fuel stations. Thus, we are proposing that a clause specifying the minimum distance between one fuel station and another is introduced with immediate effect.

5. Observation regarding the definition of “Ancillary facilities”

The policy defines “Ancillary facility” as follows – an additional structure which shall be limited to facilities related to vehicle maintenance services including vehicle washing but excluding all forms of retail and catering facilities. It may also include an ATM and vending machines which require approval from the competent authorities.

Moviment Graffitti believes that the definition of “ancillary facility” should be narrower in scope and more specific so as not to allow the development of more ODZ land for commercial car-related services such as tyre servicing, mechanics’ garages, and other services not related to the fuel-dispensing function. Failing to do so would amount to the introduction of more loopholes which would readily be exploited by unscrupulous developers.

6. Observation regarding the definition of footprint and Point 2.8

Fast charging stations and the sale of alternative fuels shall have an appropriate service area, in such a way that the parked electric cars being charged, do not interfere with the movement of other vehicles requiring other forms of fuel.

Point 2.8 fails to specify whether the area taken up by the service areas will be limited to the designated footprint of 1,000 square metres or the committed area for fuel stations located in ODZ land. We are therefore suggesting that this clause be amended to make it clear that the ‘appropriate service area’ should be within the maximum capping of 1,000 square metres or the committed area for ODZ fuel stations as stated in Point 2.5. In addition, a similar clause should be introduced for fuel stations in other appropriate areas mentioned in Point 2.2 other than those identified by point 2.2 (f) to avoid needless ambiguity.

Moreover, it would also be of benefit if ‘appropriate service area’ is included in the definition of footprint to preclude the potential development of service areas, such as charging stations, outside the designated footprint of the fuel station.

The previous draft policy made mention of ‘the requirement for decontamination of any contaminated substrate including the management of any waste arising from such decontamination’ during the decommissioning process of existing fuel stations. For some reason, this has been removed from the current proposed draft policy. We ask for it to be reintroduced to ensure compliance with existing measures for good environmental protection.

Moviment Graffitti insists that this policy revision should be implemented as a matter of urgency, and that any further delay is unacceptable. We reiterate our stance that we do not exclude further actions if the loopholes highlighted above are not tackled properly, resulting in a half-baked reform that will allow further abuse and construction of fuel pumps in ODZ areas.