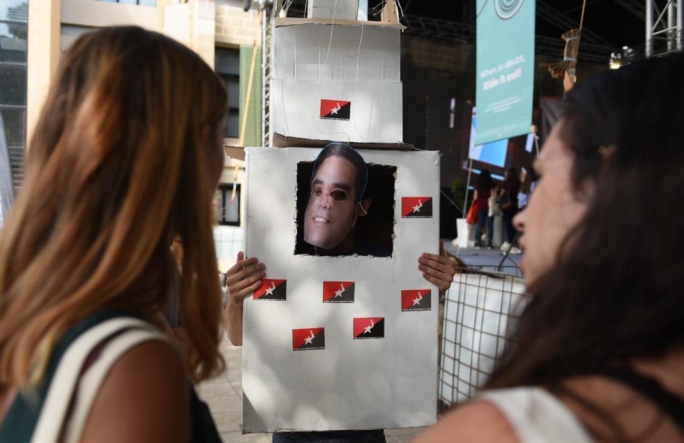 Moviment Graffitti activists were left free to wear political masks on the second day of Freshers' Week, with security not intervening this time around.

On Monday, students from the NGO who were going around campus wearing masks depicting Transport Minister Ian Borg were approached by security, who confiscated their masks, saying it was not allowed to stir political controversy during Freshers' Week.

Undeterred, the students wore the masks again today. This time, however, security did not make an appearance, with one of the activists allowed to walk around campus wearing a mask of the Transport Minister and a costume representing a tall building.

"The [demonstration] is part of Graffitti's Freshers' Week stand, which we set up to show what work [the NGO] does," Noah Fabri, a student and Graffitti activist told MaltaToday.

The aim, he said, was to create more awareness on the issues connected with construction in Malta.

"We wore masks representing people in the industry. One of our masks, depicting Ian Borg, did not go down well with university security. They told us politics shouldn't be part of Freshers' Week and confiscated the mask," he said.

"We feel this is an act of censorship. Political elements are everywhere in Freshers' Week. There are various organisations and political dignitaries who come to the event and certain [politically-related] groups also have stands here."

Fabri said Graffitti would not remain silent in the face of censorship, and it would continue practising its right to free speech.

"It seems that some financial interests may be involved, which don't want us to protest against certain people. But we will keep protesting," he said.

Earlier on Tuesday, the Graffitti activists received the backing of university academics, who took umbrage at the University of Malta's decision to stop the activity.

And in a Facebook post, Malta Developers Association President Sandro Chetcuti, who also got his mask, said he had no problem with the action.