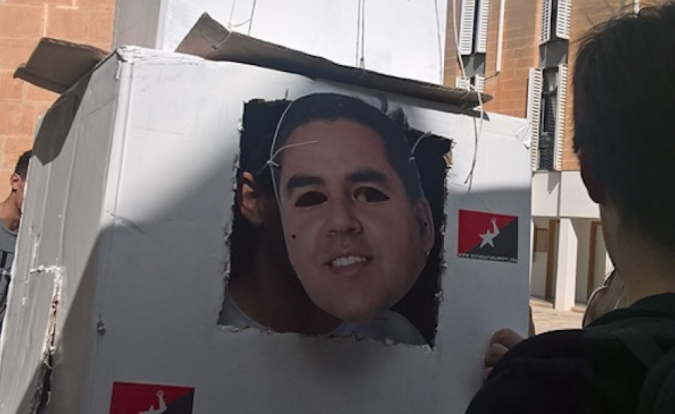 Moviment Graffitti has accused security guards at the University of Malta of confiscating a mask featuring Transport Minister Ian Borg at the NGO's Freshers’ Week stand on Monday.

A Graffitti activist who was dressed up as Ian Borg explained to MaltaToday that they were going around campus dressed up with the aforementioned mask, as well as other masks which included Sandro Chetcuti, engaging with students on environmental issues.

The university's security guards stopped them, asked them for ID cards, took their details and took the Ian Borg mask. He said that the justification for the confiscation was that no "political controversy was allowed at Freshers' Week."

Taking to social media Moviment Graffitti said that it would not be “intimidated by such tactics,” and demand that their material is returned to them immediately.

“It is a sad irony that the University of Malta acts as a censor and tries to stifle any form of debate. It is perhaps the University's way of showing its servilism to the commercial interests that fund an event such as Freshers' Week,” the NGO said.

The University of Malta said following the incident, that while it supported political debate "as evidence by the setting up of the Malta University Debating Union", it had to intervene in this particular situation for fears that the matter would escalate.

"The Moviment Graffiti representative was asked to remove the mask when he ventured outside the designated Moviment Graffitti stand and mingled with students visiting other stands. It was at this point that security officers, concerned that the matter might provoke a reaction and escalate, decided to act to defuse the situation," the statement read.

It added that the Freshers' Week event is not the appropriate platform to voice any form of protest and that it reaches out to thousands of students and is visited by various dignitaries.