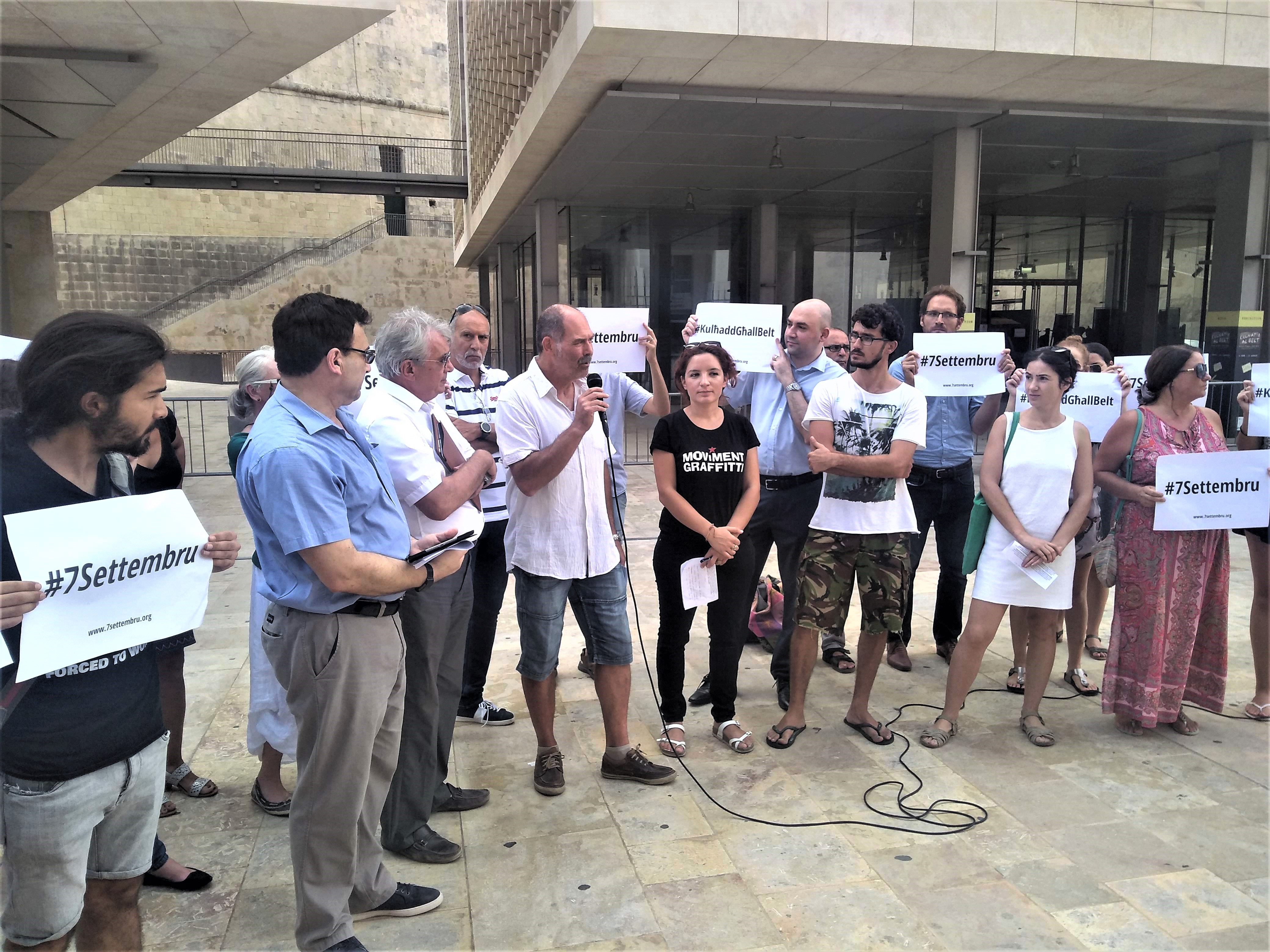 Sixty groups have registered their participation in the protest so far. The updated list of groups can be viewed on www.7settembru.org.

The six demands of the 7th September protest – to start at 10am from the law courts in Valletta – are the following:

Most planning policies are designed around the interests of the few, instead of public wellbeing and environmental protection. As a consequence of this, our country has been besieged by senseless development which is destroying the natural environment and ruining our quality of life at an alarming rate.

We demand a radical change in these planning policies so that these can truly respect the interests of the majority, including future generations, instead of protecting the profits of the few. Among others, a number of policies allowing construction of villas, fuel stations or hotels in ODZ should be revoked, as well as the high-rise policy which allows excessively tall buildings in various areas of the island, without any plan or consideration of the negative effects these policies are having.

ii) Authorities Responsible for the Environment and Planning

The authorities entrusted with safeguarding the environment and planning are run with a blatant lack of transparency, responsibility, and independence. It is clear that most of the decisions taken by these authorities - decisions that impact us strongly and directly - have already been taken behind the scenes, away from the public eye. It is unacceptable that certain groups with economic and/or political clout are allowed to ruin our lives and the environment by pulling the authorities’ strings for their own benefit.

We demand a profound change in the composition of these boards, the election of their members and the way they are run. First among these, the Planning Authority (PA) and the boards that fall under its remit (for example, the Planning Commission and Planning Board) as well as the Environmental Resources Authority (ERA) and the Building Regulations Office (BRO) which has now been turned into an MDA sub-office. The operations and decisions taken by these authorities should be free from commercial and political interests; we want democratic authorities that can truly decide in the best interests of our country.

Communities around Malta and Gozo are under attack from proposals for massive developments that have no respect for either residents or the environment. These large projects are having a devastating impact on our quality of life, since they lead to a massive increase in congestion, pollution, and noise, as well as usurping the air, light and space from our neighbourhoods. The proliferation of these enormous projects, such as the dB Group’s project on the site of the former ITS, is being carried out without a holistic plan or evaluation of the cumulative impact which these towers and globs of building will have on people and the natural environment.

We demand a moratorium on these large-scale projects until a comprehensive and serious plan for development in Malta is introduced. This plan should ensure that these types of projects respect the community and are sustainable.

iv) The Regulation of the Construction Industry

Dust, danger, noise, broken pavements, illegal dumping of waste - this is a daily reality for thousands of people in our country, and all this because of the lack of control over the construction sector. In a few months, we’ve seen buildings crumble and numerous workers dying in various construction sites. The response to all this has been completely inadequate. Residents are still carrying the responsibility, the psychological and financial burdens (as well as effects on their health) to ensure they won’t be buried alive because of construction works next door. This is a ridiculous and unacceptable situation, just like the lack of systematic and persistent lack of enforcement.

We want a system whereby developers and authorities are truly responsible of the work that is being carried out in construction sites so as to ensure that this doesn’t endanger or disturb people’s lives. This can only be achieved if the authorities stop issuing permits carelessly, and by capping the number of permits to be issued every year. There should also be serious enforcement, without exception, of all the laws that regulate the construction industry, so that residents and workers are given protection and dignity.

Our country is besieged by a frenzy of tree-cutting and the destruction of agricultural land sacrificed to road widening and construction. We’ve been told these should reduce traffic and traveling distances; however, studies worldwide have shown that road construction and widening do not solve the traffic issue. The studies carried out by the Maltese authorities confirm this clearly: no new road will save the country from gridlock unless there’s a shift to alternative means of transport. In spite of these studies, we face a lack of serious investment in these alternatives, such as efficient public transport and infrastructure for cyclists. In the meantime, millions are being spent on new roads that will not solve the issue.

We demand that the Government reconsiders the decision to build and widen roads that will destroy a scandalously huge amount of trees and arable land. Instead, the Government should be working on the creation and implementation of a strategy that truly addresses the traffic and pollution issues, and this strategy should include serious investment in alternative means of transport.

vi) Respect for our Planet, our Country and Ourselves

Malta's natural resources are considered only in so far as they can turn a profit. Our country is the most built up country in the European Union with 33% of the land built up. This puts our natural habitats and biodiversity under immense pressure. Our water and air are polluted without a thought, land is taken up in ever-increasing amounts, ecosystems that flourished for generations are covered in concrete, and wildlife populations are collapsing at an accelerating rate. This short-sightedness is now affecting our health. Close to 600 people die every year due to air pollution. There are 5 new cases of chronic asthma every single day. Our mental health is suffering, with stress and anxiety at record highs. The mantra of "money in your pocket" is ringing hollow as we see loved ones suffer, as we travel further afield to be able to unwind, and as evidence mounts that our actions are causing catastrophic changes to our planet's natural and ecological systems.

We demand that government puts citizens' health at the heart of all decision-making by safeguarding remaining open spaces in urban areas, strengthening the protection of natural habitats to prevent further loss of biodiversity, and committing to reaching and surpassing emission reduction targets. Our future depends on it.