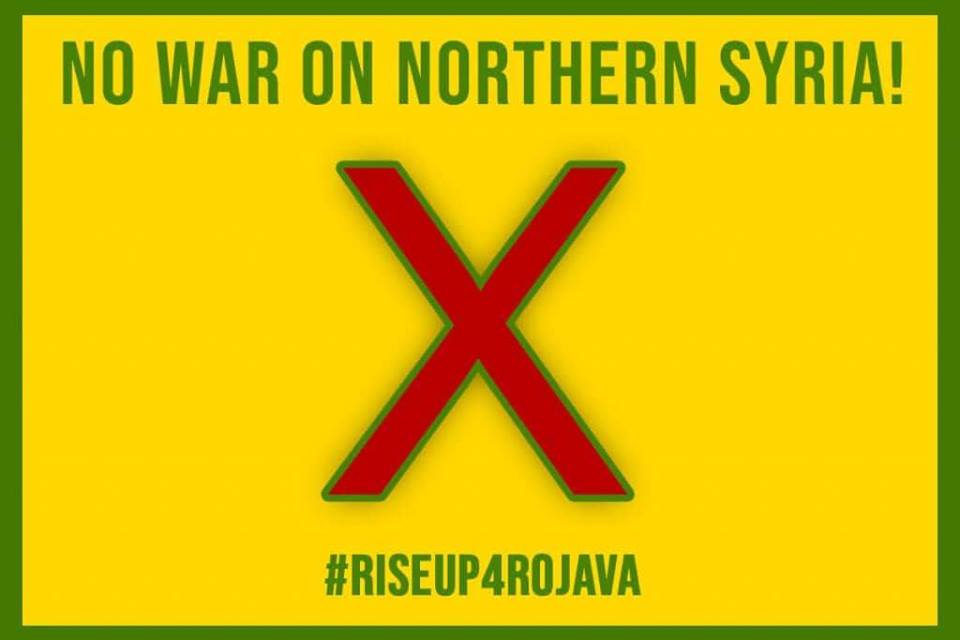 The Kurdish community in Malta, with the support of Moviment Graffitti, are organising a peaceful gathering on Saturday 19th October at 10am, outside the Turkish embassy in Floriana, to condemn the Turkish invasion of Northern Syria (Rojava) and the brutal, unprovoked assault by the Turkish state on communities in this area.

On Saturday, people in Malta will join the global outrage at Turkey’s invasion that is resulting in the massacre of Kurds and other communities in Rojava and their displacement on a mass scale. The actions of the Turkish state are clearly driven by its hatred of Kurds - a group that also suffers systematic oppression and state violence within Turkey itself - as well as by its desire to destroy the egalitarian and democratic model being built in Rojava.

In fact, Turkey is using Islamist militias to carry out its war on communities in Rojava, and these are engaging in the cold-blooded assassination of Kurdish civilians such as woman's rights activist and political leader Hevrin Khalaf. Turkish President Recep Tayyip Erdoğan has also made it clear he aims to change the demographics of Northern Syria. This demographic re-engineering is already at an advanced stage in the Kurdish province of Afrin. After the Turkish invasion of this province last year, Turkish-backed Islamist militias have driven Kurdish people out of their homes and lands, to replace them with people coming from other parts of Syria. Kurdish and other communities are thus facing the imminent risk of being ethnically cleansed from large swathes of Syria.

It is truly saddening that Turkey’s abhorrent actions are being enabled by the United States’ betrayal of the Kurds and the inaction of European countries. Only four years ago, the world was celebrating the liberation of Kobane – one of the main cities in Northern Syria - by Kurdish fighters from the hands of ISIS. Now, those Kurdish forces and Rojava communities that had been used to effectively clear ISIS from the region and that were pivotal in the defeat of this terrorist group, have been completely and cruelly abandoned to Erdoğan’s ambition to destroy the Kurds and other communities in this region.

The Turkish invasion is threatening to revive the ISIS insurgency as thousands of ISIS members held in camps guarded by the Kurdish forces will take the opportunity provided by the fighting to flee and reconstitute terrorist cells. Kurdish forces guarding ISIS prisoners have been targeted by the Turkish army and renewed ISIS activity in Rojava has been reported. One should also note that, for years, Turkey has permitted weapons, recruits, and resources to reach ISIS through its borders.

Both ISIS and the Turkish invasion pose an existential threat, not only to Kurds, but also to all the ethnic minorities and religious groups indigenous to the region, including Arabs, Christians (Armenians, Assyrians, Chaldeans, and Syriacs), Turkmens, Chechens, Alevites, and Yazidis.

On Saturday, we will gather outside the Turkish embassy in Floriana to call upon the world to take action and stop the invasion of Rojava, the ongoing massacre of communities in this area and the renewed ISIS threat brought about by the Turkish government’s actions. We also urge the Maltese Government to honour its Constitutional obligation to actively work for peace by informing the Turkish ambassador that Malta forcefully opposes the Turkish invasion of Rojava.